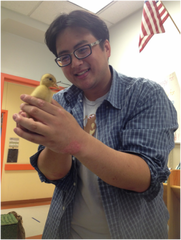 Mr. Andy began his teaching career at TALES as a Pre-K teacher during the 2012-2013 school year. It was a grade he never expected to teach but life works in weird ways. He quickly fell in love with the age group. He received his Bachelors in childhood education and Masters in Teaching English to Speakers of Other Languages from Queens College. Mr. Andy grew up and still resides in Flushing. He attended P.S. 24Q, I.S. 237, and Francis Lewis High School. During his first year of teaching, he realized the important role of play in child development and is constantly looking for ways to bring play to the students of TALES. In 2013-2014, he was able to secure the Scholastic Clifford Be Big Grant and brought in $1,000 worth of toys to go towards a Family Center Night at P.S. 244Q. Mr. Andy loves video games. His free time is spent playing games with an engaging plot and well developed characters. Every October, Mr. Andy attends the NYC Comic Con and has started to dressed up as his favorite Star Wars characters.Donorschoose.org has been a big factor in his classroom. With a child led play based approach to learning, Donorschoose.org has helped Mr. Andy get materials he needs to keep up with this philosophy.