Mr. Andy in the News!

A Flushing educator received the “Changemaker Challenge” award from Students Rebuild, a Bezos Family Foundation program that mobilizes young people to take action on the world’s most critical issues.

Andy Yung, a pre-K teacher at The Active Learning Elementary School in Flushing, was recognized ahead of a special virtual award show at the culmination of Students Rebuild’s latest initiative, the Changemaker Challenge.

A Flushing school teacher along with Councilmember Peter Koo and Queens Botanical Garden introduced the first Free Little Library at the Garden with a green ribbon-cutting ceremony on Wednesday.

It would be easy to infer that when parents don’t show up to teacher conferences or school events at P.S. 244, the Active Learning School, it is simply because they don’t care. But Andy Yung, a pre-K teacher at the school, knows better.

Yung grew up in the same Flushing neighborhood where he now teaches. When he was young, his own immigrant parents had to work extremely long hours to keep the family afloat — and he knows many of his students’ families have to do the same.

Last school year, Yung downloaded the messaging app WeChat, popular in the largely Chinese-speaking community he serves. Using the translate feature, he was able to begin texting with parents — some of whom work out of state — and to schedule video conferences with them.
Click HERE for the Article

94 Percent of U.S. Teachers Spend Their Own Money on School Supplies, Survey Finds

New York Times, May 16th, 2018
Andy Yung, a prekindergarten teacher in Queens, is adept at raising money online for ambitious classroom projects, but even he sometimes pays for supplies out of pocket.

And he has company. According to a federal Department of Education survey released on Tuesday, 94 percent of public school teachers in the United States reported paying for supplies without reimbursement in the school year that straddled 2014 and 2015.

​Roombas, Refrigerators and Other Unexpected Tech That Teachers Actually Ask For

EdSurge, May 30, 2018
Andy Yung has been teaching Pre-K in New York City for the past six years, and he works thoughtfully to incorporate technology into his instruction in a developmentally appropriate way. “When you think of tech in the classroom, everyone thinks of iPads and SMART boards,” he says. “But with younger ages, they’re often too exposed to screens, so I had to figure out how tech would look different in a Pre-K classroom.”
Click HERE for the Article

Healthy Snacks & Life Lessons
About eight hours away in Flushing, Queens – New York City’s most diverse borough – Andy Yung teaches a class of 4-year-olds at a school that’s focused on giving them a healthy start. The kids are active and moving around a lot, and their parents are encouraged to provide them with healthy mid-day snacks, like yogurt, fruit and veggies, to give them the fuel they need to stay focused on learning. But healthy food can be pricey, and some families don’t have the means to provide it.

Click HERE for the Article
A section for all those times Mr. Andy made it to a newspaper or news story!

PIX 11 News, February 25th, 2016
FLUSHING, NEW YORK – What started out as a crowd-sourcing effort is now reality for Pre-K teacher Andy Yung and his class of Jedi’s-in-training at PS244 in Flushing, Queens. The first of its kind, the afterschool enrichment class combines the love of Star Wars and fitness. “It’s more about showing our kids that there are different ways to stay fit and active,” Yung told PIX11 News. “Other than the standard that they know, that they’ve learned in gym class or anywhere else.” Every class starts out with a standard warm-up, which includes stretches, planks, two rounds of lunges and a few laps around the gym. The Padawans eventually duke it out with a choreographed battle that follows the principles of Tai Chi with the same movements and health benefits.
Click HERE for the Story and Video!

Taiwanese Orchids on Display This Weekend at Queens Botanical Garden

The Queens Botanical Garden is where you can find  more than 250 pots containing Taiwanese orchids, and there are numerous works of art by contemporary artists.

The program's manager says the exhibit is a good example of how culture is celebrated every day at the Garden, which tries to showcase more than pretty blooms.

"We have two days of robust programing, collaborative dance perfromances, movie screenings, instlation art and what better way to ceelbrate then here at the garden with flowers? So we welcome them here with open arms," says Queens Botanical Garden Programs Manager Regina Forlenza.
The exhibit runs until 5 p.m. Sunday and is included with admission to the garden.
Click here for the article and video!

Village Voice, June 4th, 2015
When Andy Yung first asked his boss for permission to purchase more than a dozen lightsabers, the request was met with more than a little skepticism. A pre-K teacher at The Active Learning Elementary School in Flushing, Queens — and an avid Star Wars fan — Yung was proposing his idea to start a "Young Jedi Academy" for his students. TALES was founded seven years ago with the mission of promoting health, wellness and creativity among its students, and has been no stranger to out-of-the-box learning programs in the past. But school-sponsored lightsaber fights were a tad much even for them.
Click here for the full story and pictures! 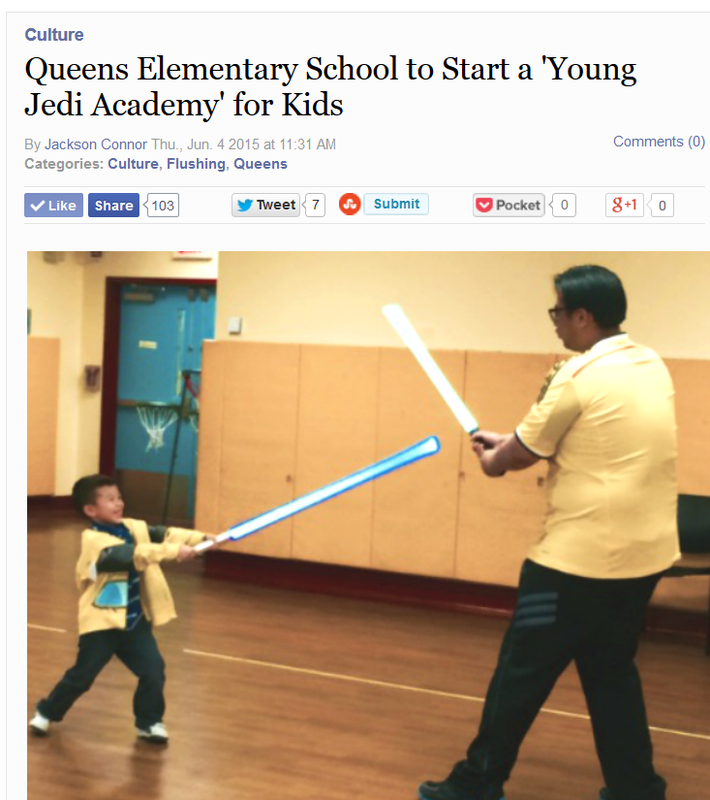 PIX 11 News, May 19th, 2015
A long time ago in a galaxy far – well actually not that long ago or that far away. It’s at PS244 in the Flushing section of Queens where a movement is underway.

Pre-K teacher and Star Wars fanatic Andy Yung is on a mission to launch a Young Jedi Academy, an after school program that will teach students how to get fit – the Jedi way.

PS 244 seeks to teach through play

Queens Chronicle, November 6, 2014
Andy Yung, a prekindergarten teacher at PS 244 in Flushing, said he believes children in his class learn better through play than through strict academics.

Yung said that is why he’s made it his mission to secure a new set of foam building blocks for the schoolchildren, so they can unlock their creativeness during recess. 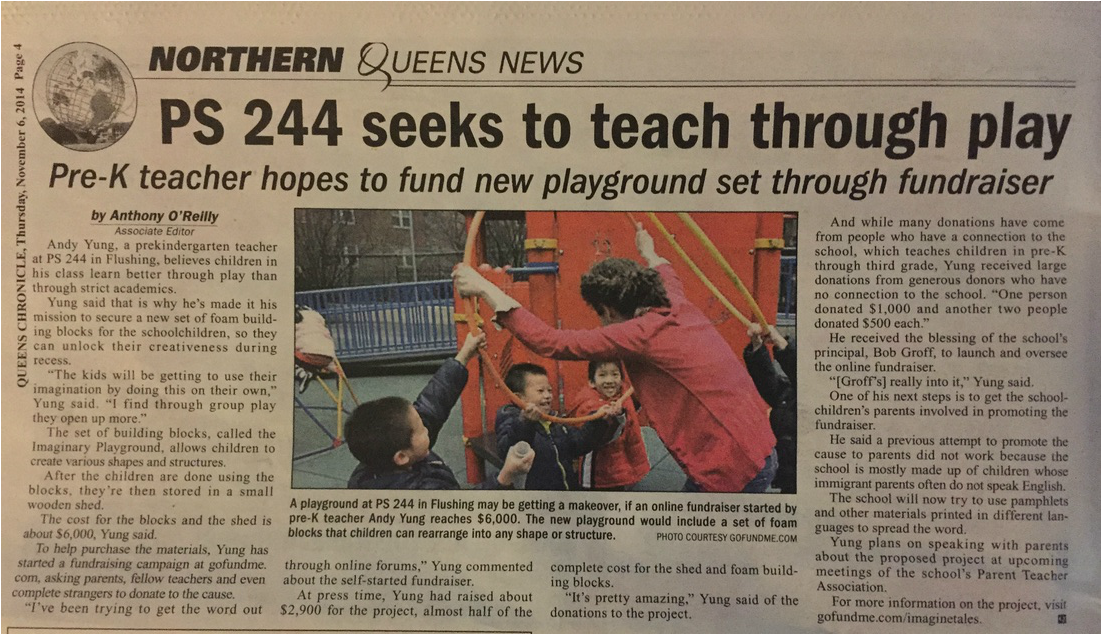 Queens Parent, November 2013
Andy Yung of FLushing, a pre-K teacher at P.S. 244Q The Active Learning Elementary School, was awarded first place and a $1,000 community grant in the fifth annual Clifford the Big Red Dog BE BIG in Your Community Contest, organized by Scholastic Media and HandsOn Network.

The national contest is a signature program of the ongoing Clifford the Big Red Dog BE BIG campaign. It invites people of all ages to submit a "BIG Idea" that demonstrates Clifford's BIG Ideas- share, help others, be kind, be responsible, play fair, be a good friend, believe in yourself, have respect, work together, and be truthful- for a chance to win a community grant to be used towards implementing the winning proposals.

﻿Click here to see the Be BIG Contest winners!﻿ 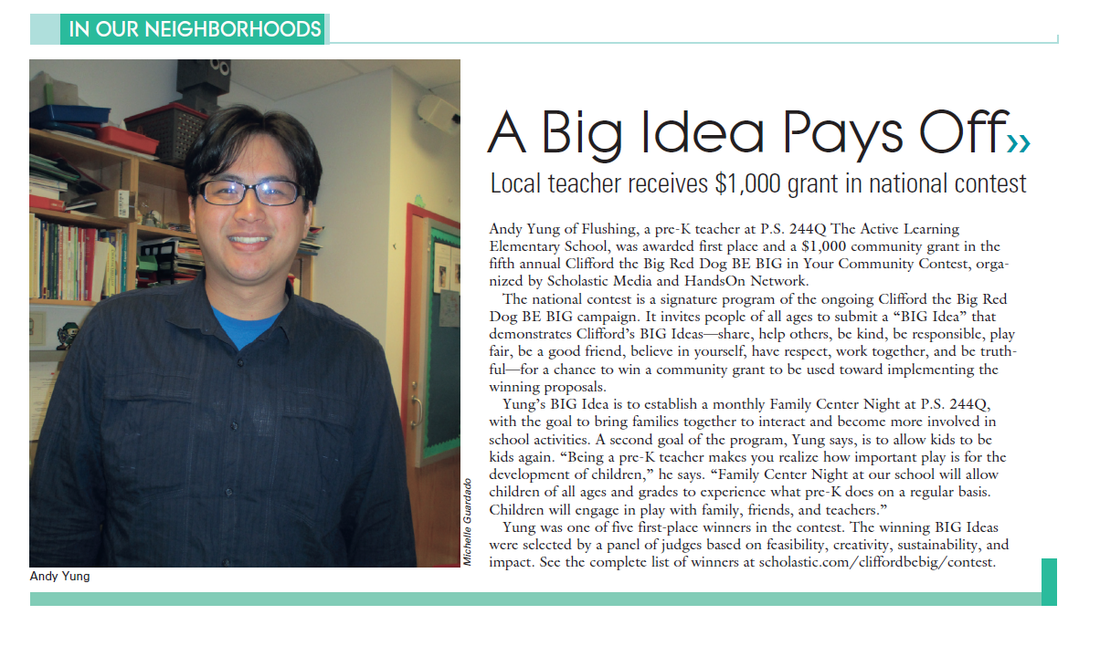 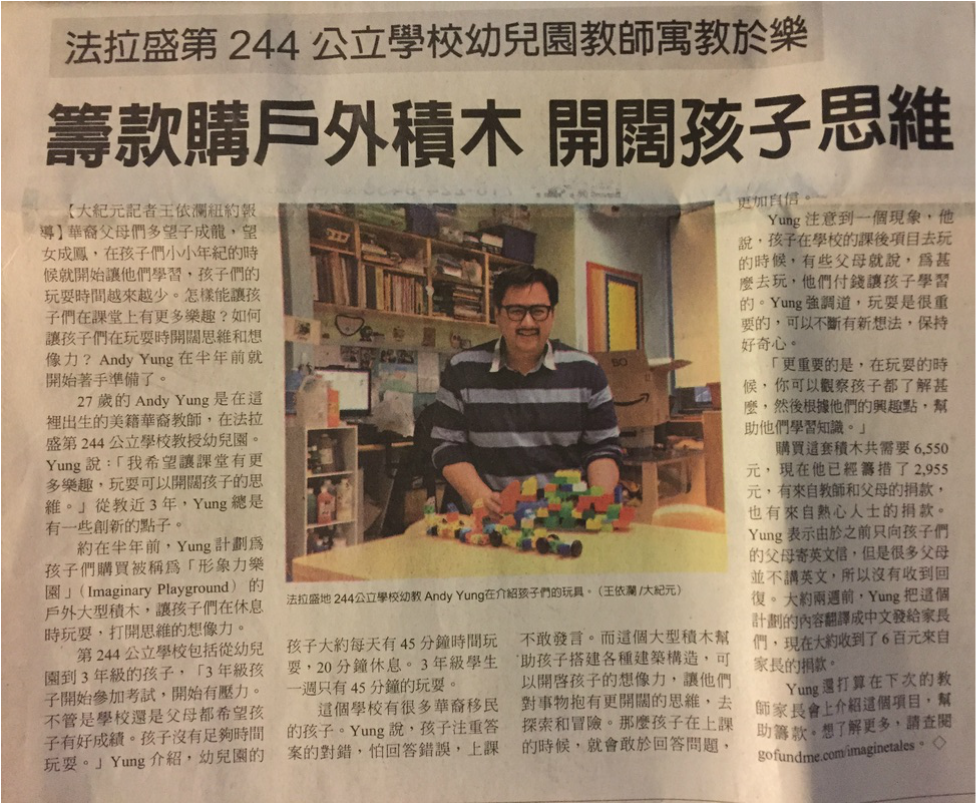